Moscow is known for it’s larger than life monuments throughout the city. One of my favorite attractions, however, is located under the bustling streets. The Moscow Metro consists of 206 stations over twelve lines, has been functioning since 1935, and serves more than 9.7 million people every day. Built under the command of Stalin, the various stations serve as “palaces for the people”. Today it not only functions as public transportation, but a museum showcasing the history and beauty of Russia both past and present. Here are all the nitty-gritty details you need to know about taking yourself on a self-guided Moscow Metro tour, as well as my route recommendation.

This route will take you to 8 stations, starting and ending at the 2 stops nearest the Red Square, Teatralnaya and Ploshchad Revolyutsii. I have added 2 optional stops to this self-guided tour, which I highly recommend. You will just need to double back at the end. I would budget 4 hours minimum as you will want to explore fully. Add more time as you add more stations. 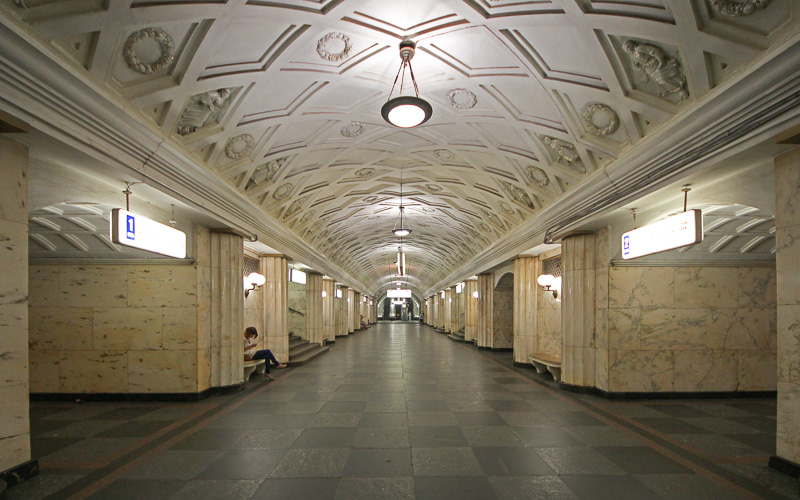 Teatralnaya Station received its name for its proximity to numerous theaters, including the Bolshoi Theatre. Decorated with white marble from the demolished Cathedral of Christ the Saviour, Teatralnaya features 7 male and 7 female figures representing music and dance. 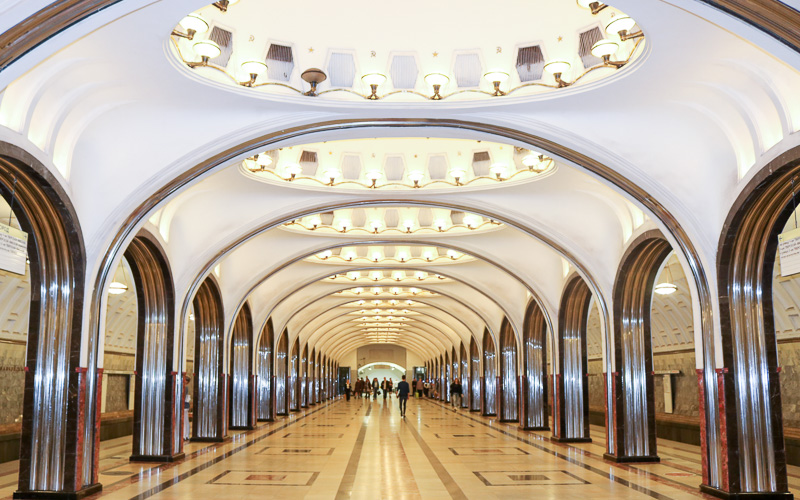 Named after Vladimir Mayakovsky, the Russian poet who was a part of the Russian Futurism group Hylaea, this station shows off the Soviet Union’s wish to advance into the modern age of technology and machines. There are 34 ceiling mosaics showing “24 Hours in the Land of the Soviets” created by Alexander Deyneka. 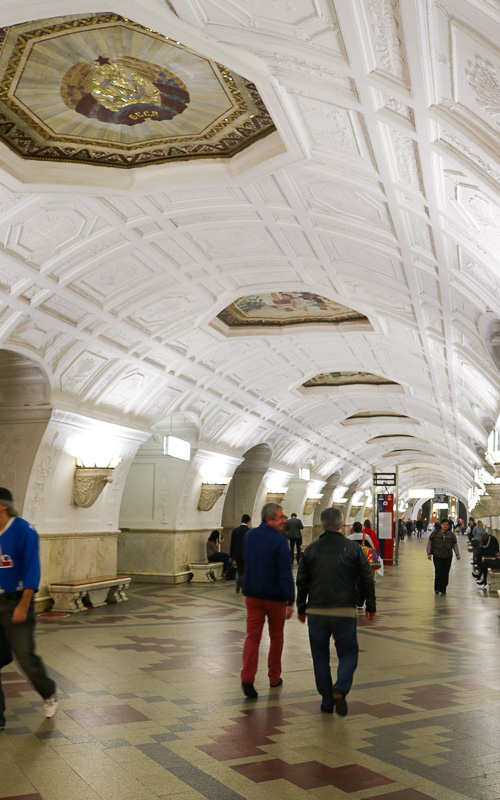 Belorusskaya Station is named after the nearby Belorussky Rail Terminal, where trains head west to Belarus and western Europe. The entire station pays homage to the Belarusian people with 12 pictures on the ceiling depicting their daily lives. It also features pink marble from Birobidzhan that is seriously gorgeous. 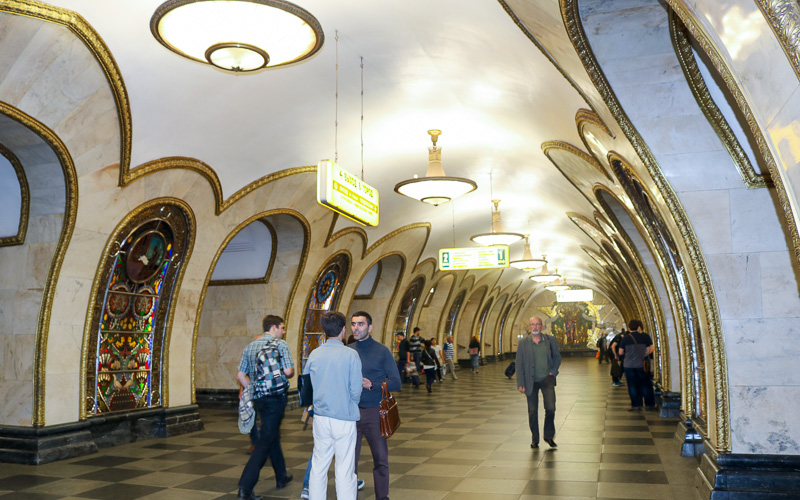 Novoslobodskaya is most noteworthy for its 32 stain glass panels, created by Latvian artists E. Veylandan, E. Krests, and M. Ryskin. Six of them show “intellectual professions” of architects, geographers, artists, energy engineers, musicians, and agronomists, and the rest are all geometric drawings. All of the stained glass is illuminated from behind, and it is seriously breathtaking. The end of the platform is covered in a mosaic named “Peace Throughout the World” by Pavel Korin. 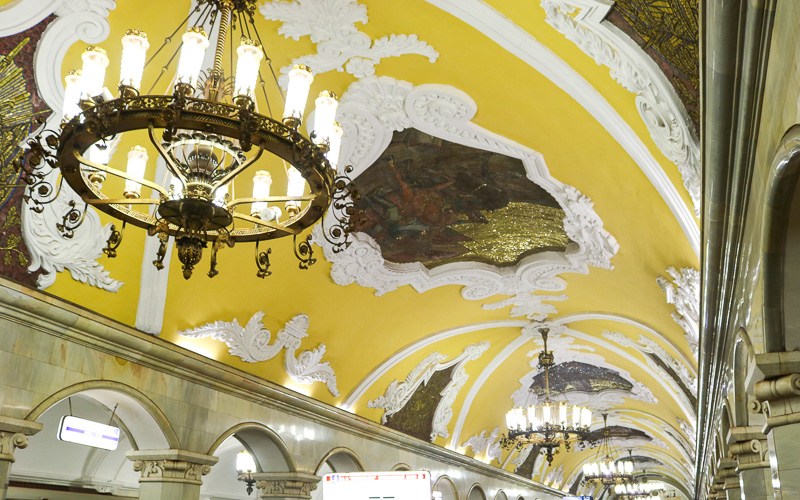 Ahhhh, my favorite station (and Instagram’s favorite too!). Named after the All-Union Leninist Young Communist League, or Komsomol, the mosaics feature hardworking youth volunteers and historic military heroes. It is also the busiest station in all of Moscow. The real eye-catcher here is the Baroque-styled ceiling, painted yellow with lavish chandeliers throughout. 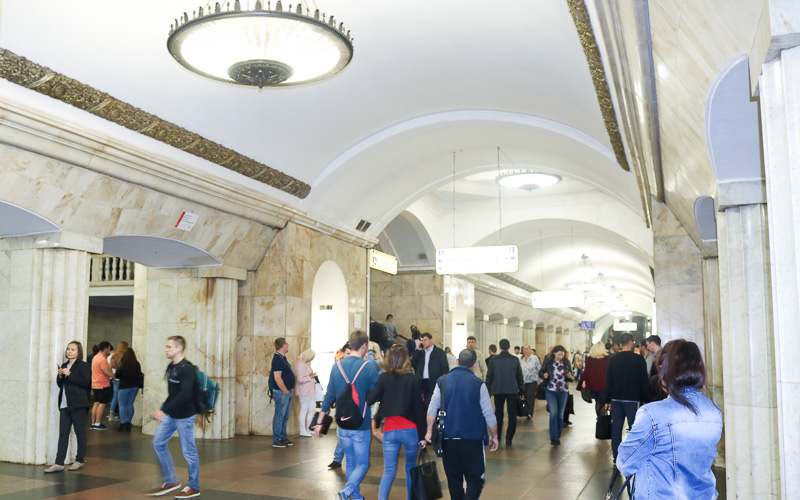 It must be hard to follow Komsomolskaya. Poor Kurskaya is just a plain station all around, but it’s necessary for us to stop here briefly to get to my second favorite station. This is also where you would connect to Kursky railway terminal. 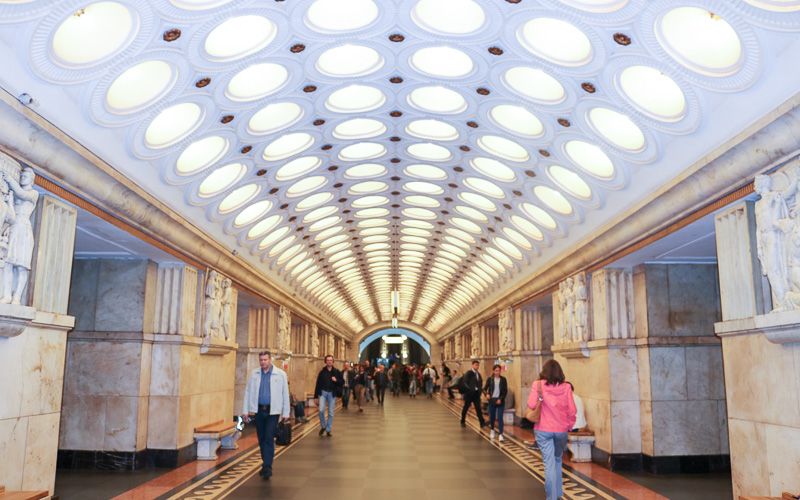 Inspired by the nearby light bulb factory, the ceiling is covered in 318 lamps. World War II halted construction until 1943. Inspired by WWII, twelve marble reliefs showing the struggles that war caused for both industrial and agricultural workers were added. Elektrozavodskaya is a close 2nd favorite of mine, and the ceiling seems like what I imagine the ceilings of alien homes would be. 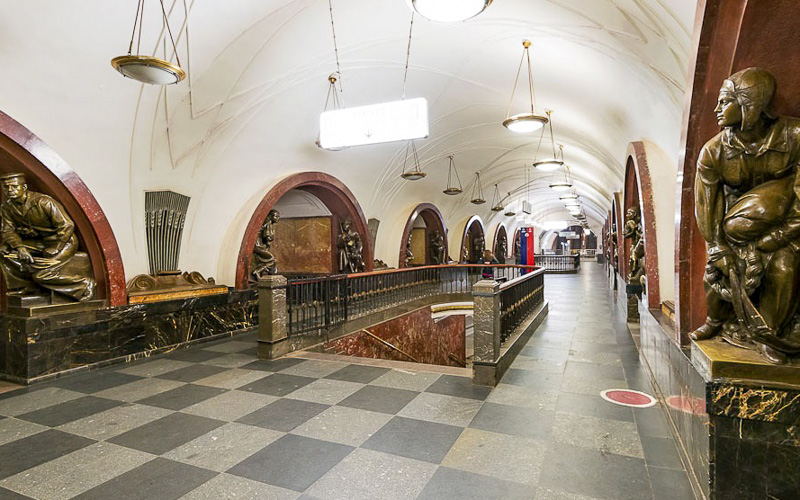 Named after Revolution Square, under which it resides, this metro stop has sculptures galore. There are 76 of them in total, but make sure you take the time to find the soldier with the guard dog and rub the dog’s nose for good luck. There is also a female student who’s foot you touch to cure an unhappy relationship. 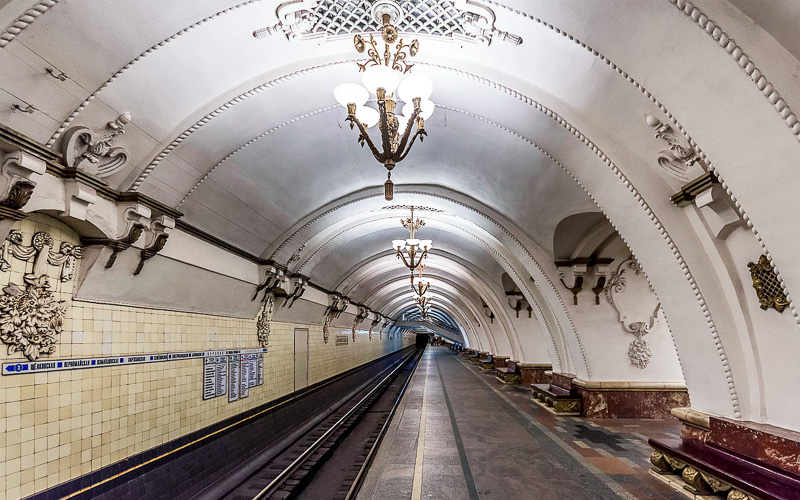 Be careful here as there are actually 2 Arbatskaya stations! One is on the light blue line, but the one we want is on the dark blue line. A German bomb damaged the original Arbatskaya station in 1941. This station was built to replace it and also double as a bomb shelter. It is the second-longest platform of the Moscow Metro at 250m long. The original station was eventually repaired and reopened, so now we get to deal with having 2 stations with the same name. 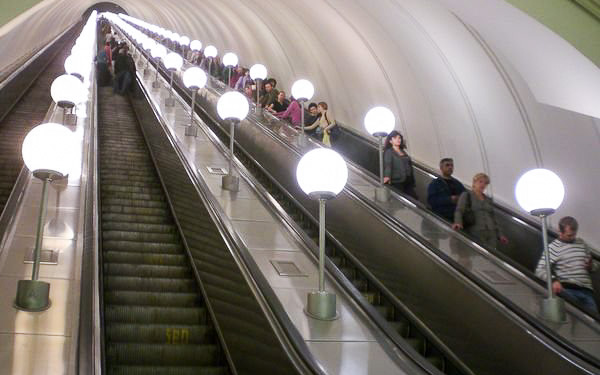 While the Park Pobedy station is rather unremarkable at first glance, it is actually the deepest metro station in Moscow and the deepest in the world by maximum depth! (It’s 3rd deepest in the world by mean depth if you want to get nitpicky.) Which also means, that Park Pobedy has the longest escalators in Europe. So if you want to go for a ride, head out to this station.

Have you ever ridden the Moscow Metro? Which station is your favorite? Let me know in the comments! 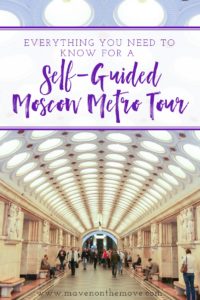 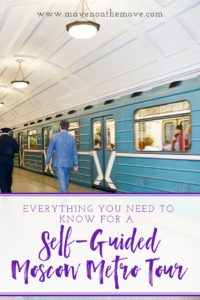 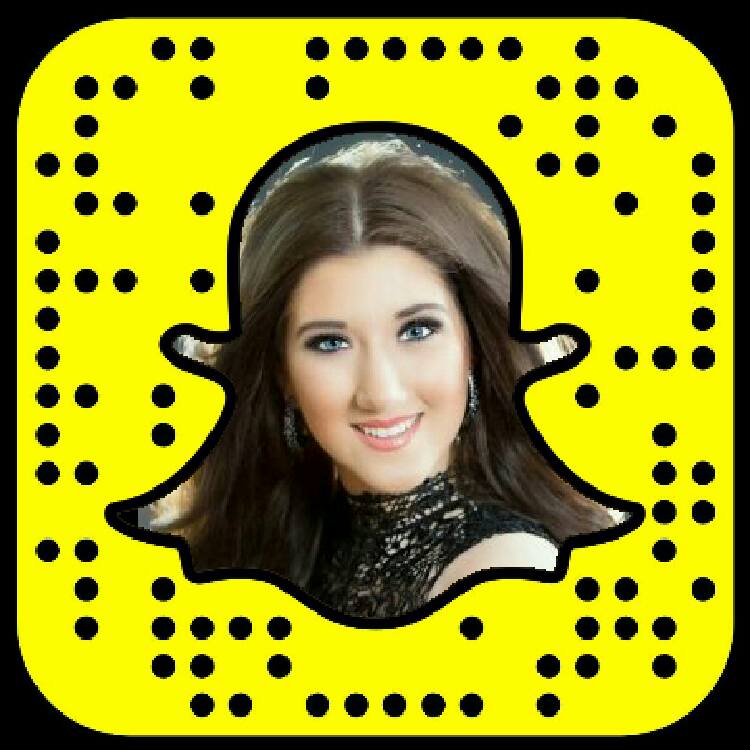 Hey there! I'm Kalyssa, a travel blogger slowly ticking things off my bucket list while still holding down a full-time job. While leaving the corporate world to travel constantly seems like a perfect world, for most of us, it isn't feasible. I'm here to show you that you can be an adventurous globe-trotter and still be gainfully employed. Read more about me by clicking my snapcode. Thanks for joining me on this trip. -K
Follows